The EU states are expecting first payments this summer to start post-pandemic investments; it was about a year after the EU-28 leaders agreed on issuing €750 billion in joint debt to reboot their pandemic-ravaged economies. Beyond the urgency for the states to get the EU funding, the success of the national recovery and resilience process will have huge ripple effects in talks on fiscal integration. Besides, only about half of the EU-28 presented to the Commission their recovery plans before the end of April. The states also face some preliminary complexes in their planning processes.

Whether the EU states’ economies will succeed in rebooting socio-economic growth in line with the sustainable principles and climate requirements in the long term; the process will activate heavy and complicated discussion on the deepening of the Union. Its failure would have tremendous consequences for the EU’s image, the bloc’s governance, common market confidence, and possibly for the European integration process in general.

More on the Council’s decision in: https://www.consilium.europa.eu/en/documents-publications/treaties-agreements/agreement/?id=2020025&DocLanguage=en

First, it is about the states’ ratification of the Union’s “own resources decision”: all EU-27 countries need to ratify legislation, called “own resources decision”, ORD – allowing the Commission to borrow on the global financial market and increase the guarantees from the EU states to be able to repay debt. On ORD see: https://oeil.secure.europarl.europa.eu/oeil/popups/ficheprocedure.do?reference=2018/0135(CNS)&l=en

Large majority of the EU-27 have already done so, but 10 EU countries still have to complete the formalities for ratification. In some cases, it’s down to securing a majority in a parliamentary vote, as in Finland and the Dutch Senate; in others, a vote hasn’t yet been scheduled, as in Hungary and Austria, noted Politico.

The process has already survived a few stumbling blocks: e.g. a complaint to Germany’s constitutional court sought to stop it, but failed; the Polish ruling coalition split on the issue, forcing the Law and Justice party to make a deal with the opposition to pass the bill; and the Baltic countries have been using it as a bargaining argument to secure funding of the sub-regional “Rail Baltica” infrastructure project.

The member states’ ratifications are expected to be finalized by the end of June (to allow joint borrowing to begin in July) and the funds’ disbursements can’t happen until then.

“For the first payments to be made, we need all member states to have approved the “own resources decision”; I am confident that all will be in place by the summer,” said Commission President Ursula von der Leyen on the occasion of the submission of a first Portugal national plan (22.04.2021) in the EU’s process of implementing the Recovery and Resilience Facility.

Second in line is the EU’s approval of the national spending plans: the EU-28 countries were set to submit their recovery plans by an April 30 deadline or soon after; Italy, Spain, France, Germany, Greece and Portugal (i.e. the six of the fund’s largest beneficiaries) have submitted their plans in the required procedure. The Commission has two months to provide for the plans’ approval to the plans; however, the disbursements can be delayed due to changes and alterations in the initial planning; hence some substantial disagreements can occur.

The problem is that the national plans need to fulfill a number of investment conditions, such as targets for green and climate changes (37 percent of national investments) and digital transitions investments (20 percent of the total); these two main required conditions represent commitment to a sufficient number of structural reforms in the states. Besides, the EU is to establish an independent monitoring body to oversee the correct expenditures’ outcomes.

The so-called frugal countries: the Netherlands, Austria, Finland and Sweden already insisted on the possibility of using the “emergency brake” should they think that EU funds are being misused; the threat to possibly being performed through checks of the national plans submitted by other southern, central and eastern European states.

Third, the EU’s recovery fund’s distribution still lacks clarity: although the EU countries are supposed to receive billions in grants and cheap loans – the EU states will have access to loans, which have been capped at €386 billion and even mote in grants. The preliminary breakdown of the EU’s recovery fund pre-financing, grants and loans by the member states (in euros) looks the following way: 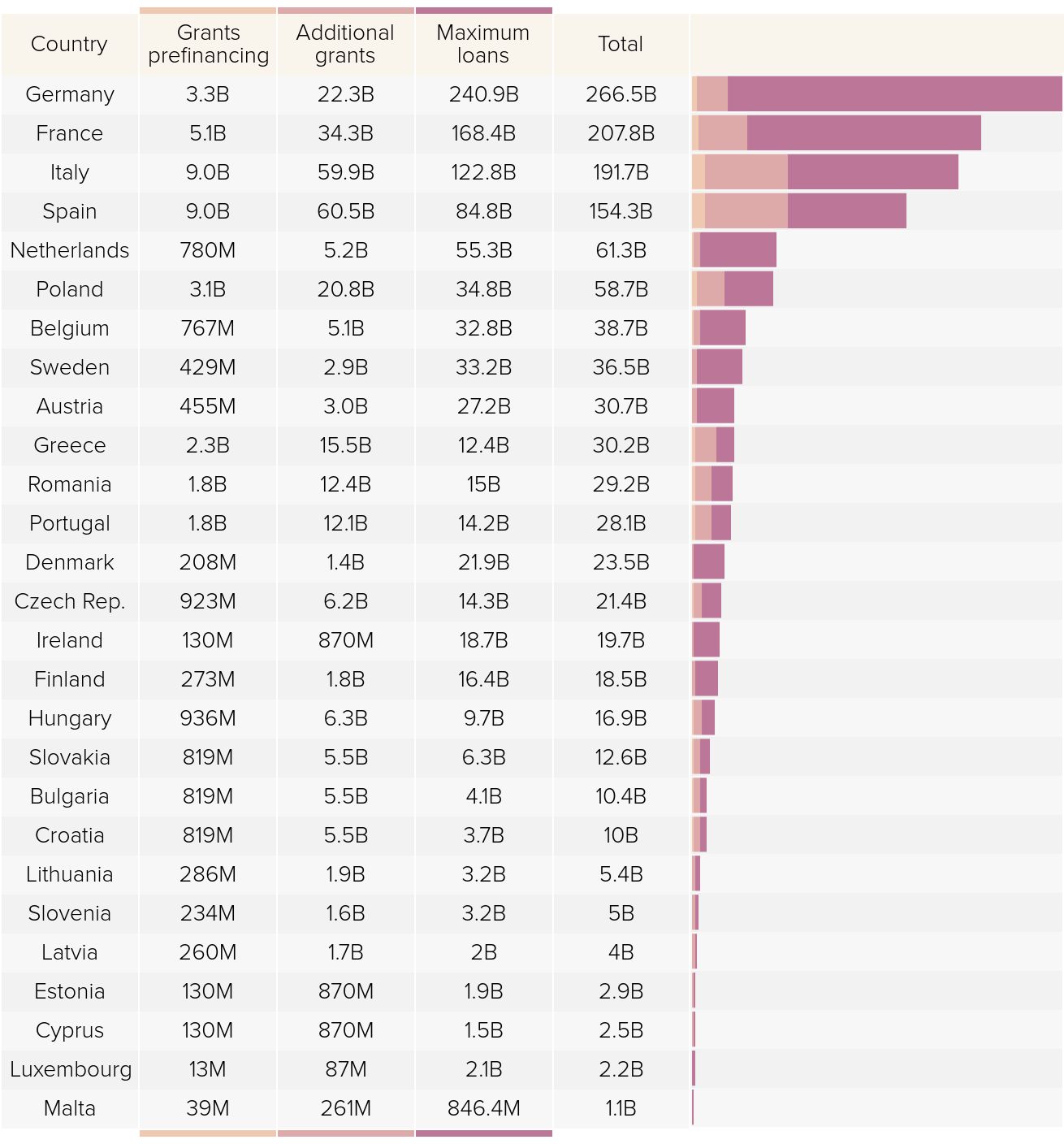 Fourth, some EU institutions and the states’ parliaments can exercise oversight measures, e.g. the European Parliament has a say in the process, though not a binding one. The Parliament and the Commission will hold a “structured dialogue” every two months in which MEPs will point to implementation issues and the Commission has to take them into account.

Still, the Parliament is wishing to exert its control on ensuring the EU money: it has already started organizing its own follow-up process, e.g. a meeting is scheduled for May 10 between the economic and budget committees and the Commission representatives (V. Dombrovskis and Paolo Gentiloni). The Parliament’s goal is to make national recovery plans and the implementation process to follow the investment rules.

Fifth, is the payback issue, as it is vitally important to find ways of repaying over €400 billion in grants and interest costs: i.e. these amounts are to be repaid over the next three decades. The size of the EU recovery package was agreed at €750 billion in 2018 prices in budget negotiations; that’s about €800 billion in current prices.

The Commission’s preferred option to repay more than €400 billion in grants plus interest costs is to collect new taxes feeding into the EU’s budget, known as “own resources, ORD”. The other portion of the recovery fund, up to €386 billion in loans, should be repaid by the EU countries.

Commission’s idea is to make already in 2021 available for the states about €15 billion; the amount, the Commission estimates, should be sufficient to repay the borrowed funds by 2058.

The Commission is working on a proposal for three new levies, which it plans to unveil by the end of June. The proposal will likely include an extension of the bloc’s carbon-trading scheme, a carbon border adjustment mechanism, and a digital tax. More on additional levies in:

The Commission’s proposal (carbon-trading scheme and border adjustment mechanism, as well as a tax on digital companies’ revenue) is meant to raise sufficient funds to repay the debt over the next three decades. However, each of these proposals is going to need extensive negotiations, and final unanimous agreement by all EU states: the issues are highly questionable due to improbable increase in income-based contributions to the EU budget or cuts in expenditures.