The old “political-economy’s” paradigm is facing dramatic challenges: with the two spheres of science involved (i.e. economics and political science), the concept is being “refurbished” towards closer and inherent “unified connections” between the two to concentrate on the most optimal national growth models and peoples’ wellbeing. The latter in particular, is becoming a common denominator in the modern national political and economic trajectories. However, it is the experts’ community that has to show the ways for a closer cooperation between politics and economics dominated by the sustainable development goals, reducing pollution, circular economy’s patterns, digitalisation, etc.

Modern global and European challenges have added new aspects to the political economy’s transformations: e.g. humans’ ecological footprint is already exceeding the limits of planet’s resources along the ever expanding peoples’ demands. The SDGs and ecology’s challenges also include into modern governance the greenhouse gases’ effect on sustainability and the capacity of the earth’s ecosystems to absorb waste products.

However, the post-pandemic time is a perfect one for rethinking traditional connections between politics and economics with a view to perspectives. In politics, the general ideas hardly changed in times: i.e. the GDP growth, employment and a welfare society are still dominating in the national agendas. Much more complicated are the ideas in economics: post-pandemic has shown already necessary changes: e.g. in the workforce and the labour markets, sustainability, “green growth” and digital economy/society, as well as dramatic re-distribution of wealth and a “new era” in financial services, to name a few. This sketchy enumeration is showing that most of the issues in both politics and economics on a national ground are strongly overlapping and interconnected.

In many ways the “old normal”, i.e. traditional political economy’s patterns, has proved to be obsolete; besides, present covid-pandemic has required not only the launching of emergency measures in the states but regimes necessitated a respect the principles of “unified politics and economics” with an increased social dimension.

The disruption caused by pandemic lockdowns affected peoples’ day-to-day life and work; however, pandemic at the same time has opened a window of opportunity in modern changes towards tackling most urgent socio-economic issues by providing answers to perspective growth and wellbeing.

There are seven “golden requirements” that the national governance systems shall implement in order to be fit for contemporary challenges. The EU institutions have already made it easier for the national governance to modernise existing political economy’s priorities. Thus, for example, the Commission strongly encourages governments to include in their recovery and resilience plans investment and reforms in the following priority areas:

New political-economy’s approaches to national and transnational governance have to overcome traditional methods and instruments. Thus, national financial institutions have to balance profits and moral obligations to detect and deter financial crime and money laundering.  Present pandemic has forced institutions to adapt to a fully remote model, which opens up the opportunity to rethink their approaches to anti-financial crime efforts: transforming financial institutions can be done only through disruption of the cause, i.e. the illicit profits.

More on political aspects in growth in: https://www.integrin.dk/2021/01/23/political-economy-in-european-integration-new-growth-patterns-part-ii/.

Among the EU’s strategic political priorities for 2024, there are the following main recommendations for the member states:

Of course, these directions do not cover the whole spectrum of the national political-economy’s initiative and priorities; they are suggesting some common and optimal ways to reach agreed European-wide socio-economic goals. They define specific objectives for the EU’s institutions and the states’ governance for a five-year period as well as indicators to help them track progress: thus, all EU departments report on progress each year in their annual activities.

The social dimension (coped with extensive social dialogue and active social partners’ involvement) has always been at the core of a highly competitive European social market economy. The new EU headline targets on jobs, new skills and poverty reduction and the revised Social Scoreboard proposed in the European Action Plan will help to facilitate progress towards implementation of the Social Pillar principles, taking into account different national circumstances and a coordination framework in the context of the European Semester.

The new political economy’s paradigm reveals a clear perspective for the states around the world and in the EU being oriented –firs of all – towards optimal directions in the European and global competitiveness. So far socio-economic situation in the present global ratings shows that, for example, the Baltic States still needed additional impetuses. Thus, Estonia occupies 30th rank, Lithuania 35th and Latvia is on the 49th place in competitiveness among 138 states in the world; political elites should treat such estimates as serious signal for urgent steps to increase competitiveness. However, some states, e.g. Latvia in its national-2020 plan included only a very modest task, to “reach 45th rank in the global competitiveness index.

The EU states’ decision-makers shall be active in moving quickly to create new mechanisms in SDGs implementation and in digital technologies. As World Economic Forum-2020 underlined: “time and expertise on one hand” coped with “enabling government policies and regulations on the other” could trigger sufficient progress. As soon as the rapid pace of change of technological innovation will go on, the “channels of technology” will play a greater role in supporting states’ efforts in SDGs implementation.

Thus, government actions in the member states are likely to include the following actions: = developing responsible “technology codes and standards” as well as data protocols in consultation with industry; = harnessing public procurement tools (including sustainability standards) for digital assets and suppliers of “responsible technology requirements”; = prioritizing investment in the 4IR-enabling infrastructures including broadband, open cloud connections, satellites and energy grids; = taking a lead in basic/applied research and fintech at the “intersection of technology and societal/environmental impact”, including opportunities for more customers’ oriented research; = catalyzing innovation in new solutions, e.g. through incubators, accelerators and price support mechanisms; = performing perspective sectoral and environmental policy solutions through subsidy reforms; and = updating national structural policies to reflect the 4IR achievements, including reforms in labour market, taxation, social safety nets and education.

Existing digital applications being deployed presently through the specialists’ exploration of the “fourth industrial revolution changes, 4IR would provide for drastic innovation in the next decade in all spheres of socio-economic development. Digital aspects in the research, development and innovation’s phase are already providing an active support for quicker SDGs implementation.

For example, quantum-computing is already determining optimal carbon capture materials and AI-enabled research assists in creating new antibiotics to address microbial resistance to current antibiotics; in short, there are apparent and breakthrough innovations –in technology and social/governments policies- to assist the SDGs’ implementation.

Regardless of some problematic issues, modern societies are capable of turning available science, technology and digital achievements into breakthrough solutions that shall bring countries closer to optimal SDGs implementation.

The intention to calculate and compare human demands (as well as the governments and businesses) with existing planet’s resources, i.e. called humans’ “ecological footprint” has shown the Earth’s potential to renew. It’s called “overshoot day”, that moment in a year when humans have used up more natural resources that the Earth can renew during a year.

For example, in 2020, it was August 22 – more than 3 weeks earlier than in 2019; due to pandemic’s aftereffects and reduced industrial growth, for the first time in years, the global overshoot day has moved back; in 2021, it landed on July 29th – nearly a month earlier.

It has led to over 9 percent reduction in the global ecological footprint on a year-to-year account, according to the Global Footprint Network’s assessment. However, through about 50-year analysis, the “overshoot day” has been constantly moving down: from December initially to August-July at present.

The calculations show that it would take 1.6 Earths a year to meet the needs of the world’s population – even taken in a sustainable way.

Since 1997, the US NGO Global Footprint Network has been assessing an ever increasing global consumption of the limited planet’s resources by the expanding peoples’ demands and raising constant warning alarms. In 1970, there were only 3 days’ worth of resource demand that exceeded Earth’s bio-capacity; in 2020, humanity’s resource demand exceeds Earth’s bio-capacity by 132 days.

Researchers measured a state’s bio-capacity, i.e. the land productivity and sea areas; then, the demand of a chosen state has been subtracted: its inhabitants’ needs for plant-based food and fiber products, livestock and fish products, timber, space for urban infrastructure, and forest to absorb its carbon dioxide emissions from fossil fuels.

The analysis’ outcomes were expressed in “global hectares”, standardized with world average productivity for the sake of comparison. For example, if a population’s demand for natural assets outnumbers the supply, than such states/regions are running an “ecological deficit”; and the research sets a symbolic date to mark the beginning of this deficit.

It was found out that all nations in the world – in principle – can go on without widening this deficit. However, there are significant differences between countries: the worst is Luxembourg and the best is Indonesia; e.g. in Europe the “overshoot days” in such states as France, Italy, Portugal and Spain is somewhere in May, in Sweden in April and Denmark in March. It means that most European states exceed the Earth’s potentials in the middle of a year… 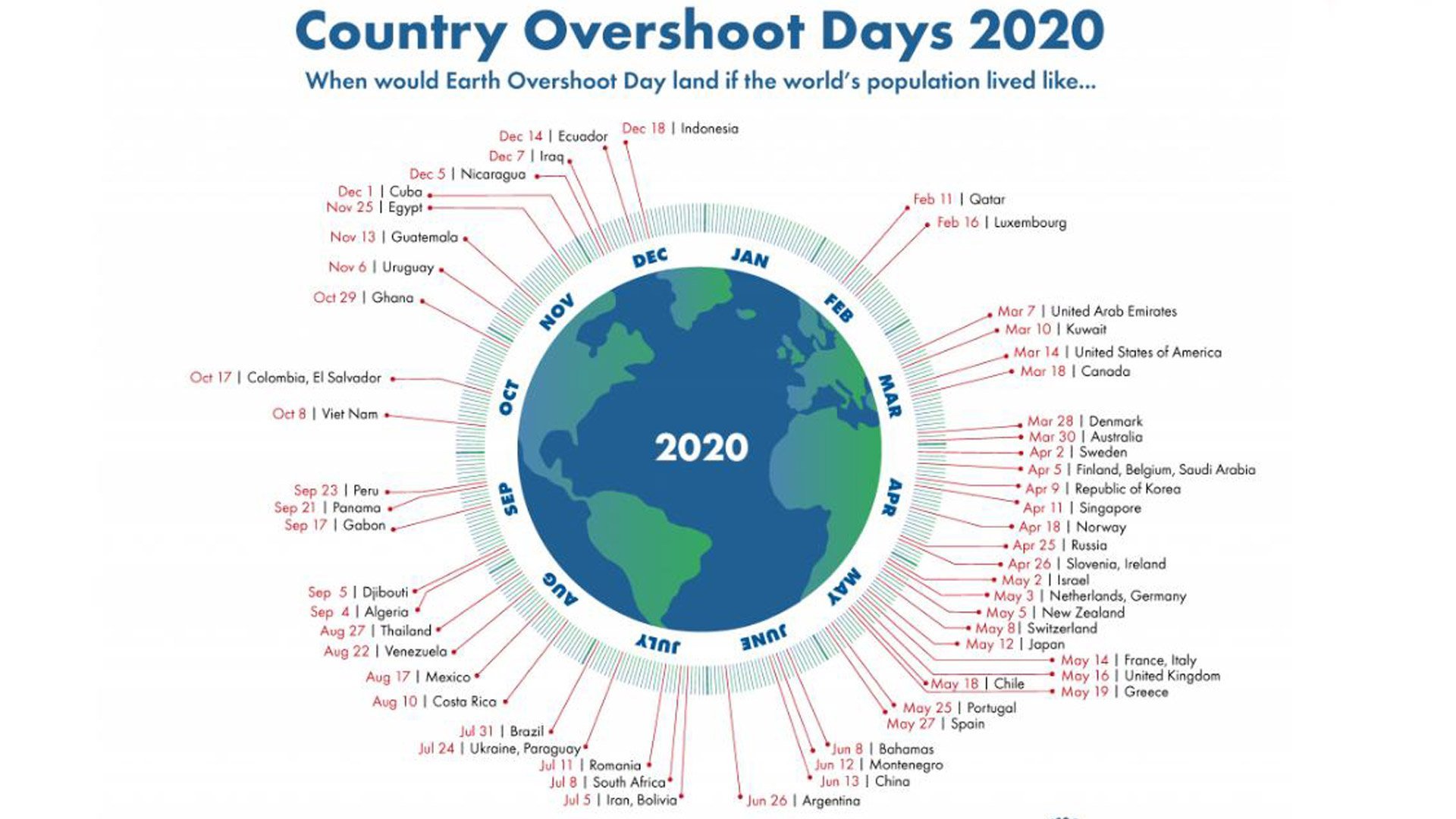 Humans’ ecological footprint also includes the greenhouse gases and the capacity of the earth’s ecosystems to absorb waste products and renew consumption.

The rule of law: part of the new political economy

The EU’s basic law has had some measures and instruments connecting the legal and economic issues: e.g. the states that breach the rule of law can see a reduction in the EU’s funds, especially in the states which are net contributors.

The EU institutional governance admitted that it has been “quite naive in the past” believing, that the rule of law principles would stay unchanged forever, and they will work in the states automatically and without any problems… The EU’s political imperative has turned to increased pressure on member states to follow the adopted Union’s principles included into the Treaties (srt.2 TEU). The “pressure” is about the trust among the member states and the EU institutions, independent courts (working everywhere with the same quality and certainty) and free social media; as, generally, it is about peoples’ trust in the European integration. However, peoples’ trust in the national governance and the EU institutions is decreasing: it is seen in most of the member states, including for example, Poland and Hungary.

The EU’s €1.8 trillion multi-year budget as well as the recovery/resilience package for the states includes some “rule of law” mechanisms, which was already agreed by the EU leaders in July 2020. However, Poland and Hungary disagreed with the idea and abstained from voting in the Council. Hence, the EU authorities continue to search for a compromise on that element of the deal even if Poland and Hungary will never “come on board”. However, some sort of agreement has “to work” even if only two states out of 27 do not agree; in that situation, the European co-legislative institutions, in particular the European Parliament has to be very tough in voting on this issue.

As soon as about 70 percent of the member states’ laws originated in the EU institutions, the role of the national legislators (i.e. national parliaments, etc.) is reduced to a political agenda. Besides, the EU political guidance in the recovery-resilience plan has already suggested some directions in the national priorities: mainly, it is about two main elements in the national budgets, i.e. 37 percent for climate change actions and 20 percent for the digital economy and society issues.